Why would you use Python to read a pcap?

For most situations involving analysis of packet captures, Wireshark is the tool of choice. And for good reason too - Wireshark provides an excellent GUI that not only displays the contents of individual packets, but also analysis and statistics tools that allow you to, for example, track individual TCP conversations within a pcap, and pull up related metrics.

There are situations, however, where the ability to process a pcap programmatically becomes extremely useful. Consider:

In all these cases, it is immensely helpful to write a custom program to parse the pcaps and yield the data points you are looking for.

It is important to realize that we are not precluding the use of Wireshark; for example, after your program locates the proverbial needle(s) in the haystack, you can use that information (say a packet number or a timestamp) in Wireshark to look at a specific point inside the pcap and gain more insight.

So, this is the topic of this blog post: how to go about programmatically processing packet capture (pcap) files.

I will be using Python (3). Why Python? Apart from the well-known benefits of Python (open-source, relatively gentle learning curve, ubiquity, abundance of modules and so forth), it is also the case that Network Engineers are gaining expertise in this language and are using it in other areas of their work (device management and monitoring, workflow applications etc.).

I will be using scapy, plus a few other modules that are not specific to packet processing or networking (argparse, pickle, pandas).

Note that there are other alternative Python modules that can be used to read and parse pcap files, like pyshark and pycapfile. Pyshark in particular is interesting because it simply leverages the underlying tshark installed on the system to do its work, so if you are in a situation where you need to leverage tshark’s powerful protocol decoding ability, pyshark is the way to go. In this blog however I am restricting myself to regular Ethernet/IPv4/TCP packets, and I can just use scapy.

A few notes before we start

The code below was written and executed on Linux (Linux Mint 18.3 64-bit), but the code is OS-agnostic; it should work as well in other environments, with little or no modification.

In this post I use an example pcap file captured on my computer.

Build a skeleton for the program. This will also serve to check if your Python installation is OK.

Use the argparse module to get the pcap file name from the command line. If your argparse knowledge needs a little brushing up, you can look at my argparse recipe book, or at any other of the dozens of tutorials on the web.

Open the pcap and count how many packets it contains.

The RawPcapReader class is provided by the scapy module. This class is iterable, and in each iteration it yields the data (i.e. packet contents) and metadata (i.e. timestamp, packet number etc.) for every packet in the capture.

At this point you may want to open the pcap in Wireshark and verify if the packet count our program reports is consistent with that reported by Wireshark.

Use scapy methods to filter out uninteresting packets. For starters, let us consider all IPv4/TCP packets as interesting.

Note the use of scapy’s Ether class in the code above, and note how we use ether_pkt.fields and ether_pkt.type to extract information from the ethernet header of the packet. Also note the use of ether_pkt[IP] to obtain the IPv4 header.

It so happens that the example pcap we used was captured by tshark with a capture filter that selected all IPv4/TCP packets, which is why all 22639 packets are reported as interesting. We’ll fix that in the next iteration of the code.

The packet capture contains, among several connections, one HTTP connection between client 192.168.1.137:57080 and server 152.19.134.43:80. For the rest of this discussion let’s only consider this connection as interesting and filter out other packets.

Note that the code below hardcodes these addresses; you may instead consider gathering this information from the command-line with argparse.

In this code iteration, we’ll access the packet’s metadata; in particular the timestamps and ordinal numbers (i.e. packet number within the packet capture) of the first and the last packets of the connection that we’re interested in.

A few notes on the timestamp:

The pkt_metadata returned by this call:

contains a 64-bit timestamp that is documented here. Essentially it is split into two 32-bit fields (tshigh and tslow), and represents the Unix time at which the packet was captured.

The tsresol field in metadata stores the resolution as either 1000000 (microsecond resolution) or 1000000000 (nanosecond resolution), based on the capability of the hardware/software that created the pcap. The field within the file as documented here is a 1-byte field, but the scapy RawPcapReader code processes this 1-byte field and provides the tsresol metadata as either 1000000 or 1000000000.

The output of our program at the end of this step looks like this:

If you’ve been executing the program in the previous steps, you will have noticed one thing: it is excruciatingly slow. This is because of scapy - for every one of the thousands of packets read from the capture file, our code builds scapy objects which, as it turns out, is an expensive and slow process.

This is a serious issue because you are, after all, developing code: each time you run the program and examine its output, you will want to write more code to tweak something, or to gain some different insight. Each time you make a small change to the code and run it, you will have to deal with its sluggishness which can get frustrating and impede progress.

The most obvious way to deal with this problem is to not use scapy at all, and instead find an alternate faster method to look at the capture packet data and metadata.

In this post, though, I will use a different approach:

The Python 3 pickle module provides a generic mechanism to save (“pickle”) a bunch of Python data structures to a file on disk, and to read the file and restore (“unpickle”) the saved data structures. This is what we will be using.

The program now has two ‘modes’ of operation:

Why is this better? Because you only have to run the pickle step (steps 1 and 2) once. The analyze step (step 3) - the part which you have to run repetitively after tweaking the code each time - is very fast because it does not use scapy any more.

The code below implements

The argparse code to parse the command line is not shown below; please look at my argparse recipe book if you need help with using the argparse module.

The run time for this step is the same as for the previous steps. This is because we have continued to use scapy to build packets from the pcap file and read their fields.

Note the ~800KB file that was created by the program. This example-01.pickle file is then used in the analyze step:

This display is the same as in the previous step, but it appears very fast. This is because we are no longer using scapy; instead we are reading packet fields from the pickle file.

Note also that in this step we are printing the TCP window sizes as well. We first read the scale factor from the “Window Scale Factor” TCP options in the initial SYN and SYN-ACK packets, and then, for every packet, we compute the window size and store it in the pickle file.

The code for the pickle step:

In other words, for every packet we read from the pcap, we build a Python dictionary that contains the values of the packet attributes we are interested in (‘direction’, ‘ordinal’, ‘relative_timestamp’, ‘tcp_flags’, ‘seqno’, ‘ackno’, ‘tcp_payload_len’ and ‘window’). Each dictionary is then appended to a list (packets_for_analysis). Once all packets are processed, the list is “pickled” and stored in the file.

The code for the analyze step:

The goal in this iteration of the code is to generate a graphical plot of the TCP Receive window on the Client. The end result is a graph that looks like this: 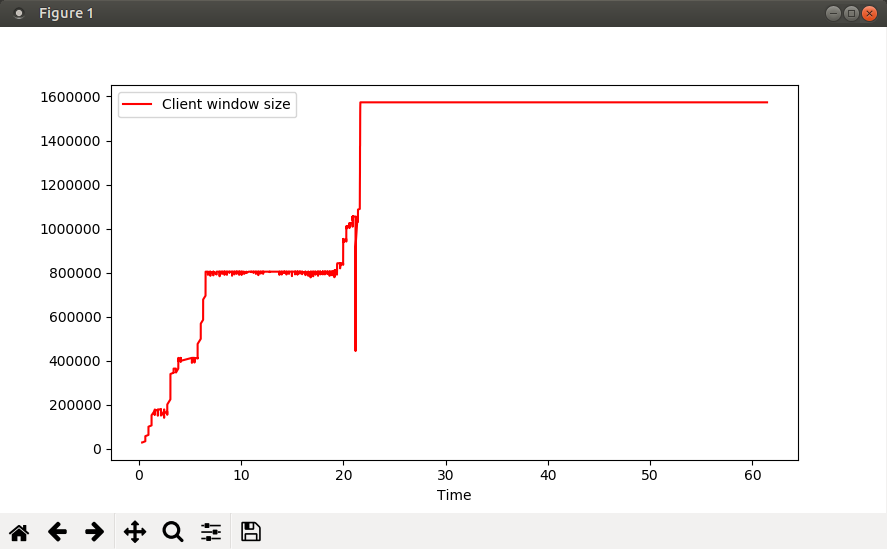 The code for generating the plot shown above, using pandas and matplotlib, is almost ridiculously easy (I am only showing the analyze_pickle function):

You will notice from the graph that the window size shows a sudden dip to some value between 400000 and 500000 shortly after timestamp 21.1. If you find this suspicious, you can again write more code to help you narrow down the exact packet number in the capture:

Armed with this data, you can now open the capture file in Wireshark and take a closer look at what happened shortly before packet #9539.

Here’s a fancier plot, where I am plotting two parameters - the client window size, and the ack number sent by the client (i.e. the number of bytes received thus far from the server): 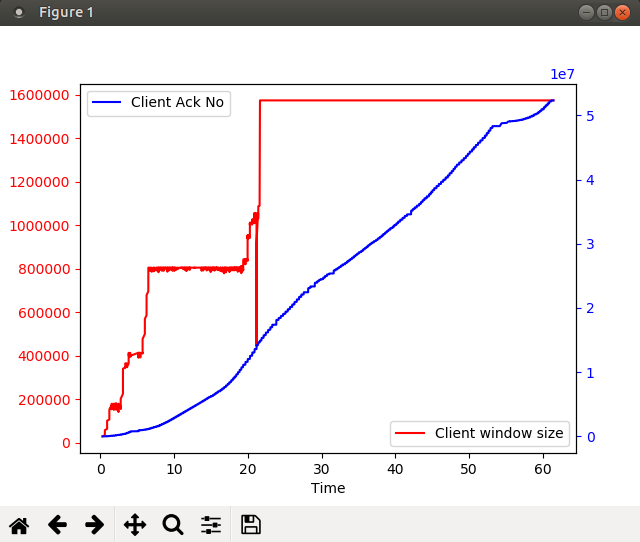 And the analyze_pickle code for the above looks like this:

With Python code, you can iterate over the packets in a pcap, extract relevant data, and process that data in ways that make sense to you. You can use code to go over the pcap and locate a specific sequence of packets (i.e. locate the needle in the haystack) for later analysis in a GUI tool like Wireshark. Or you can create customized graphical plots that can help you visualize the packet information. Further, since this is all code, you can do this repeatedly with multiple pcaps.

If you have questions or comments please send them to me by email, and I will be happy to help. My email provider is zoho.com, and my mail id is the name of this blog (“vn…an”).